“I have a great idea to get rich. All we need is a lot of money.” ― A meme on the internet

A while ago I was reading about Bernoulli trials and decided that I wanted to explore them further. I was wondering what would be an interesting case study for such a topic, and then it hit me (💡): Why not explore lottery probabilities? Little did I know that this topic would lead me down the geometric distribution road and help me better understand the uncertainty in lotteries. So, shall we?

We’ll be exploring the probability of winning the Israeli lottery held by the Pais organization, a well-known lottery enterprise in Israel. The ticket we’ll be discussing is applicable to the main lottery called ‘Loto’ and costs 5.8 New Israeli Shekels (NIS), approximately ~1.6 dollars.

Pais holds their lotteries twice a week with the regular prize of 5 million NIS, equivalent to $1,420,000. If there’s no winner for a given week, the prize accumulates to the following lottery. For the sake of the post I’ll only discuss winning a first place prize (be the only winner). In addition I won’t be discussing the effect of prize increase on when to participate.

When filling out a lottery form you choose 6 numbers in the range of 1–37 and a ‘strong’ number in the range of 1–71. In order to win first place you have to guess correctly both the 6 number set and the strong number. Luckily, the order of the 6 numbers doesn’t matter, and therefore if you wrote \(6,12...n\) or \(12,6,...n\) you’re good on both (Also known as combinations, more on that in a minute).

Another ‘luck’ in our favor is that in each lottery ticket we have the option to fill out two sets of numbers, thus doubling our odds of winning. I’m assuming we’re on the same page and you won’t use both of your attempts to guess the same sets of numbers, so that somewhat increases our odds of winning. Speaking of odds, let’s have a look at them.

To understand the lottery probabilities, we need to calculate the probability of guessing a combination of 6 numbers out of 37 options along with one strong number out of 7 possible numbers. In order to do this, we can turn to combinations:

In mathematics, a combination is a selection of items from a collection, such that (unlike permutations) the order of selection does not matter. ― Wikipedia

That’s exactly what we need. We want to calculate the probability of randomly guessing six numbers regardless of their order; If the order was important we’d want to look at permutations. In addition, each number is drawn without replacement, and therefore there can’t be repetition of the same number.

Wow! that’s a very low probability. How low? Let’s try and visualize it.

Sometimes when we receive a probability it’s hard to grasp the odds and numbers thrown at us. Therefore, I’ll try to visualize it for us. Imagine there’s a pool filled with 8,136,744 balls. One of those balls is red and choosing that exact red ball blindly will win you the lottery: 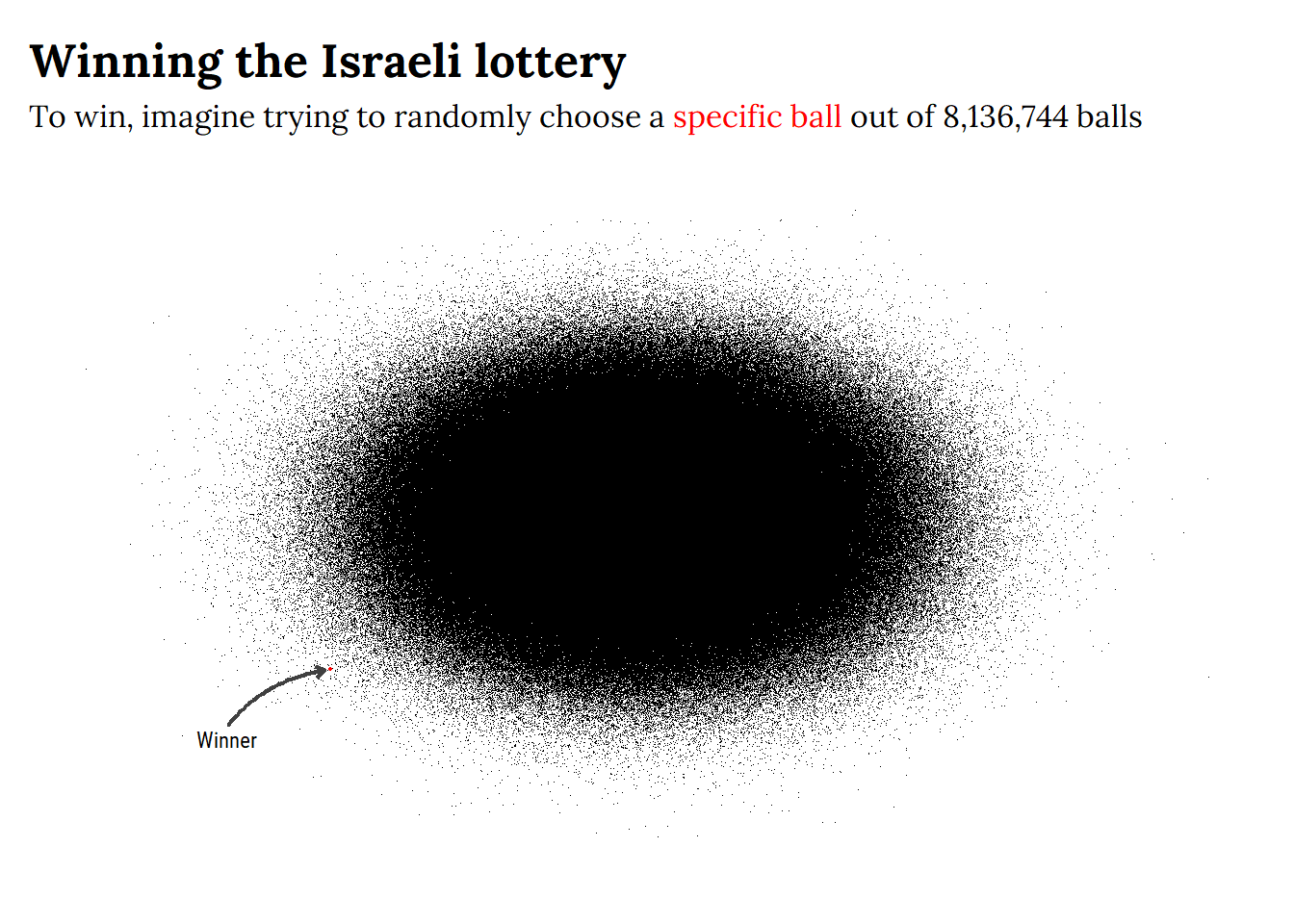 Not easy is it?

Now that we know the probability of winning at each attempt, let’s see how it manifests across multiple attempts.

A Bernoulli trial is a random experiment with exactly two outcomes - such as success\failure, heads\tails - in which the probability for each outcome is the same every time (Wikipedia). This sets the ground for discussing an outcome of a lottery in which you either win or lose.

Before we begin, we must meet several conditions to use the geometric distribution:

✔️ Each trial is independent from one another - succeeding in one trial doesn’t affect the next trial. We know this is true since winning in one lottery won’t affect your chances of winning the next round.

✔️ Every trial has an outcome of a success or failure. This assumption is true in our case where each lottery you participate in you either win or lose.

✔️ The probability of success \(p\) is the same every trial - This is also true given the lottery probabilities are consistent across each game.

Now that we got the technicalities out of the way we can start exploring some of the uncertainty surrounding the lottery.

Winning at a given trial

Generalizing, the probability distribution of the number of Bernoulli trials needed to get one success on the \(k\) th trial is: \(P(X = k) = (1 - p)^{(k-1)} \cdot p\). We can break this up according to our previous example:

Winning by a given trial

We don’t necessarily want to win the lottery on on a specific \(X\) attempt, but explore the probabilities of winning by the \(k\)th attempt. Reframing our previous question we can ask “what is the probability of winning the lottery on at least one of the first 3 attempts?”, bringing us to the Cumulative distribution function (CDF). In a cumulative distribution we calculate the probability that \(X\) will take a value less than or equal to \(k\) (in our case representing the number of attempts).

How does this question change our calculation?

But if we want to look at the first 50 attempts? we’ll have to sum each individual PMF?

Here’s exactly the use of the geometric CDF written as \(P(X <= x) = 1 - q^x\). We raise the probability of losing to the power of attempts to win by and deduct it from 1, resulting in the probability of winning by a given trial.

Winning on the first X trials

We’ll start by declaring our values. We know the probability for winning the lottery with each ticket we have is \(p = \frac{1}{8,136,744}\) (remember, we get to choose two sets of numbers in each ticket), so let’s declare that:

Once we have that we can calculate both the probability of winning up to a specific attempt and the cumulative amount of money spent reaching there (according to a price ticket of NIS 5.8):

In the above table I printed specific observations along the lottery’s cumulative geometric distribution. In our left column we have the trial number, next the approximate amount of money spent up to that trial and lastly the percent of winning by that given trial. Notice that I converted the New Israeli Shekels to dollars ($1 dollar = ~ NIS 3.5).

R has built in functions for working with the geometric distribution such as pgeom, rgeom, qgeom and dgeom which you can explore more here. For the purpose of exploring the mean we can use the rgeom function which generates a value representing the number of failures before a success occurred. For example, let’s see how many failures we’re required to reach one success:

In the above example rgeom takes the number of rounds (n = 1) and the probability of winning (p = p). The outputted value indicates the number of failures before our success.

Using this we can calculate the average number of attempts from 2,000,000 games:

Pretty close to our expected value!

In this post we were able to uncover and better understand some of the uncertainty that covers a lottery game. Using the geometric distribution we explored the probability of winning the lottery at a specific event, and winning it in the form of a cumulative distribution - Chances of winning up to a given trial.

Unfortunately, the numbers aren’t in our favor. You’d find yourself spending a great deal of money before actually winning the lottery. I’m definitely not going to tell you what to do with your money, but I hope this blog post helped you understand a little better the chances of (not) winning the lottery. But hey, apparently a New Yorker won the lottery after participating each week for 25 years so you never know.

Three resources I found extremely valuable in learning more about the geometric distribution: